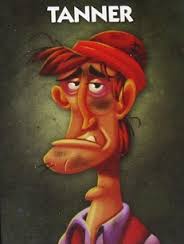 From ONUW, only wins if he dies

The mere presence of the Tanner plays an important role in balancing the game toward Team Werewolf.  As the Tanner yourself, it is extremely hard to win. On the face of it, you want to be caught out in a lie to generate suspicion but not so blatantly that you are obviously the Tanner seeking to get lynched.

In practice I have never seen someone win as the Tanner by implying they started as a Werewolf. The times I have seen the Tanner win have almost always been by pure chance (such as the player becoming the Tanner without knowing) or by appearing to receive a Werewolf card from another player (as distinct from making others think you started with a Werewolf card).

Playing effectively as the Tanner requires preparation. Some possible strategies for the Tanner include: