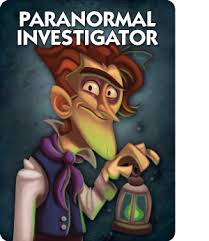 Do not reveal that you are the Paranormal Investigator. People will assume that you saw a Werewolf card and became a Werewolf even if you didn’t. Most of the time they will be correct, especially in smaller games where the chance of anyone else being a Werewolf, and therefore you seeing a Werewolf, is relatively high.

If, as the Paranormal Investigator, you do look at a Werewolf card, one strategy is to confess to being the Paranormal Investigator and that the Werewolf card you saw was actually a Minion. This will ensure the Werewolf you saw doesn’t get lynched. This can backfire massively if the Minion is identified elsewhere on the board, bringing both you and the player you claimed was a Minion under great suspicion.

One option to minimize the probability of becoming a Werewolf is to resolve to look at only one card or even no cards, rather than two. I would only do this if the cards in use in the game strongly favors Team Village (e.g. includes Seer, Aura Seer, Masons etc). If the cards are balanced (or even favor Werewolves) then would rather look at two cards even if there is a good chance of becoming a Werewolf. Gaining more information is always beneficial, and there is no inherent disadvantage in becoming a Werewolf if the initial card choice was balanced.

A common scenario is looking at one card which is on Team Village and then looking at another card which is a Werewolf. If this happens immediately claim that you were the Robber and you robbed the first Team Village card you saw, confirming what it was. The original owner of the Team Village card will corroborate your story, providing credibility that you were the Robber and took their card. This will make it difficult for the real Robber (if there is one) to contradict you.

This also works even if both cards you saw were on Team Village because even if you remained on Team Village as the P.I. you will have a difficult time convincing others of that. Its easier to claim the Robber and avoid suspicion altogether. This will only work occasionally though. If you need to use it again in a short period of time, better to quickly come clean that you were the Paranormal Investigator and saw the two Team Village cards before this information is revealed of its own accord.