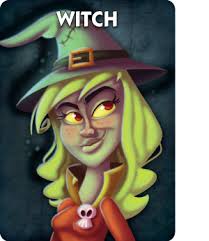 “Witch, wake up. You may look at one of the center cards. If you do, you must exchange that card with any player’s card.”

Regardless of who I swapped I always like to say I looked at one of the Village Team cards in the middle and swapped it with someone else whom I didn’t. If that person was originally on Team Wolf and believes me then he may out himself as originally being a Wolf. This can lead to either another Wolf being implicated or a Paranormal Investigator if they looked at that person’s card or even the Minion being outed if another player was defending the first player up to that point.