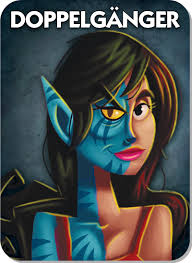 “Doppelgänger, wake up and look at another player’s card. You are now that role. If your new role has a night action, do it now.”