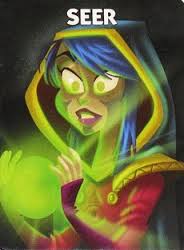 “Seer, wake up. You may look at another player’s card or two of the center cards.”

The Seer is one of the most powerful cards in the game. The Seer should almost always look at two cards in the center, rather than another player’s card, as doing so provides more information. Don’t reveal what you saw until other players have revealed their own roles, so that you can catch them in a lie.

If someone claims to be a role you saw in the center, you face a tradeoff between calling them out on it immediately or waiting. Generally, waiting will be more effective at flushing out Werewolves. Another player may try to corroborate the liar’s story, who may also be a Werewolf or a Minion. If the liar is in fact on Team Village, letting them maintain the lie for a little while to flush out Werewolves will aid Team Village. On the other hand, leaving it too long will undermine your own claim to be the Seer, leaving you vulnerable to being lynched.