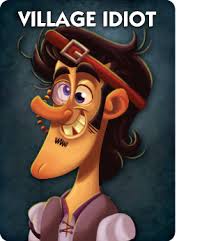 “Village Idiot, wake up. You may move everyone’s card but your own to the left or to the right.”

Generally, including the Village Idiot won’t make for a very good game because he either creates too much chaos or incentivizes people to reveal too much too quickly once the rotation direction has been revealed. It’s good to include The Village Idiot every now and then but rarely for more than two games in a row and never in sessions with more than five players because the chaos becomes unmanageable.