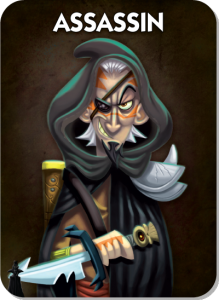 “Assassin, wake up and place the Mark of the Assassin in front of any player.”

From ONUV, only wins if his target dies

If a Team Village player received the Mark of the Assassin then this focusing of votes on a single target is particularly important for Team Vampire. Vampires and Werewolves find it difficult to coordinate their votes since communication between themselves would result in their being outed as monsters ripe for lynching. The Assassin is uniquely positioned to help Vampires/Werewolves solve this problem since he can actively campaign against a Team Village player without attracting Team Village votes the way a Vampire/Werewolf would. Vampires/Werewolves can keep their own status confidential and simply follow the Assassin’s lead during the vote.