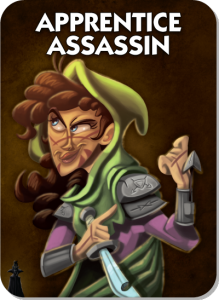 From ONUV, only wins if the Assassin dies

If the Assassin has not been outed then the Apprentice Assassin can claim to be another Team Village role and claim to have deduced that the Assassin is a Vampire. The more subtly that she can do this the better. The Assassin will be stuck in a bind since he can’t really refute this convincingly without outing himself as the Assassin.  He might only out himself as the Assassin as a last resort if he sees his lynching becoming a near certainty, but by then it will probably be too late.