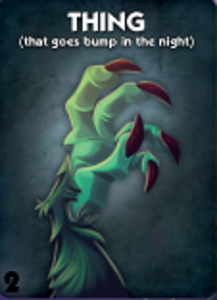 “Thing, wake up. You may tap the shoulder of the player on your right or on your left.”

From Bonus Pack 2, on Team Village

Thing is similar to the Masons, but only consumes one of the precious spots in your deck during pre-game role selection. Thing plays similar to Masons except that you don’t know if the person whom you tapped is on Team Village or Team Werewolf/Vampire. You can lie to draw out other liars, hoping that if your lie starts to unravel the person you tapped will ultimately support your claim as Thing. However, if the person you tapped was a Werewolf/Vampire then rather than offering support they will (or should) seize the opportunity to pour more suspicion on you by denying that you were ever Thing. Your best hope in this case is that enough people saw cards in the center to know that someone does in fact have the Thing card and that since no one else has claimed it on the balance of probabilities you have it.

If you are a Werewolf/Vampire and Thing tapped you on the shoulder, then expect at some point for them to call on you to back them up. Any hesitation at that point will paint you as a Werewolf/Vampire. You can get on the front foot by claiming to be Thing yourself and saying that you tapped the person that actually tapped you. If you accompany this with a knowing wink to them, they may think you’re on Team Village and go along with this lie for the time being, they will claim to be some other role, eventually be found out and rely on you to bail them out, which of course you won’t. Alternatively, they may suspect you’re a Werewolf and dispute your version of events immediately. At this point, you will have a 50% chance of being pinned as a Werewolf/Vampire.