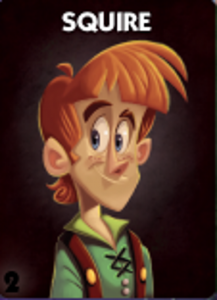 “Squire, wake up. Werewolves, stick out your thumb. Squire, you may view the Werewolves’ cards.”

From Bonus Pack 2, wins or loses with Team Werewolf irrespective of whether he himself dies

Same strategy as Minion, but the Squire needs to adjust their approach based on what he sees when looking at the Werewolf’s cards. The Squire will have more information than the wolves in this regard. The Squire should try to communicate to the wolves that they still have their wolf card to ensure their continued allegiance. Unfortunately the Squire is also incentivized to pretend that wolves are still on Team Wolf even if they no longer are. Wolves should therefore be suspicious of the Squire regardless.

If the Squire sees that one of the wolves was switched, the Squire should listen carefully to anyone who claims the switched role. Most switching involves a direct swap, so whoever had the card that the Werewolf now has probably now has the Werewolf card and is therefore an ally.

If the Squire sees that the wolves still have their cards, the he should wait for someone else to claim they switched out one of the wolves (which he knows to be false) and call that individual out on their lie, since they are most likely on Team Village and any misdirected suspicious advantages Team Wolf.