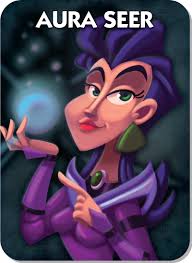 “Aura Seer, wake up. Everyone, if you have viewed or moved any card, stick out your thumb.”

From Bonus Pack 1, on Team Village

The Aura Seer is one of the most powerful cards in the game, so much so that her inclusion can quickly unbalance the game. She is in a position to contradict anyone who says they did or didn’t look at or touch any card inconsistent with what their role was. Furthermore, the mere presence of the Aura Seer in the game severely restricts the ability of others to lie, which significantly helps Team Village. If someone is going to lie they need to choose another role consistent with whether they themselves did or did not stick up their thumb during the Aura Seer’s night phase.

The following roles will stick up their thumb:

The following roles will not stick up their thumb:

Anyone claiming to be a role other than what they were needs to pick one that is consistent with whether they stuck up their thumb or not during the Aura Seer’s night turn, assuming the Aura Seer card did not start in the center. Anyone falsely claiming to be a Drunk, Insomniac or Revealer during the day phase may not realize the importance of wake order in maintaining their lie. Although each of these characters look at or move a card the genuine Drunk, Insomniac or Revealer do not stick up their thumb during the Aura Seer’s night phase because they perform their action after the Aura Seer. As the Aura Seer yourself, watch in particular for someone who stuck up their thumb and then tries to be clever by claiming one of these roles. They will likely have forgotten the critical wake order and be easy to catch in a lie. Try not to reveal that this was the way you know they are lying, since revealing the importance of wake order will ensure they, or others, don’t make the same mistake next time.

Yet a further complication is that of those roles who do stick up their thumb, only the Alpha Wolf’s and Doppelganger’s action is compulsory. Any of the other roles may voluntarily forgo their night action and therefore not stick up their thumb. However, in practice this is very unlikely to occur as foregoing their action would disadvantage that player far more than it would disrupt the Aura Seer. However, a Tanner could claim to be a Robber or Paranormal Investigator that chose not to act at night so as not to risk becoming a Werewolf. This straddles that line between plausibility and suspicion that the Tanner needs.