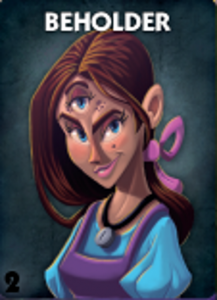 “Beholder, wake up. Seer (and Apprentice Seer), stick out your thumb. Beholder, you may view the Seer’s card.”

From Bonus Pack 2, on Team Village

Normally, the Beholder and the Seer are on the same team and, like the Masons, can afford to have one party lie knowing other will be there to back them up. But this dynamic turns on its head if the Beholder sees that the Seer has been turned into a Werewolf.

If you, as the Beholder, see that the Seer was turned into a Werewolf/Vampire, the first thing to do is determine if the Seer herself knows she is now on Team Wolf or not.

If the Alpha Wolf is in play, and you see that the (former) Seer now has a Werewolf card, then she most likely received it from the Alpha Wolf. The Seer will most likely already know this too. The Seer, being able to look at two cards in the center, would have looked at the spare Werewolf card plus another center card, and seen that the center Werewolf card was now her own Seer card. The Seer not only now knows that she was turned into a Werewolf but also knows that the Beholder knows she was turned into a Werewolf. The Seer therefore will be on the defensive and will be looking to discredit the Beholder as soon as she can determine who the Beholder is.

If the Alpha Wolf is not in play, and the (former) Seer has a Werewolf card, then most likely the Witch, Troublemaker or Gremlin gave the Seer the Werewolf card. In this case, the Seer does not know they became a Werewolf. Without a knowledgeable and defensive (former) Seer, it becomes easier to out her as a newly turned Werewolf.