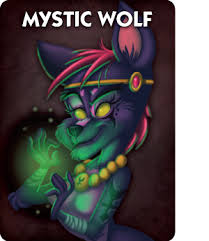 “Mystic Wolf, wake up. You may look at another player’s card.”

Since the Mystic Wolf’s power partially replicates the Seer’s power, claiming Seer is a tempting strategy for the Mystic Wolf. After looking at another player’s card she can reveal what she saw, claiming she herself is a  Seer, hoping that when that player confirms their own card her claim as a Seer will be more credible. I have never seen this strategy work. At least among experienced players, the Seer will always look at two cards in the center. A Mystic Wolf claiming this strategy will almost always be outed as the Mystic Wolf rather than the Seer.