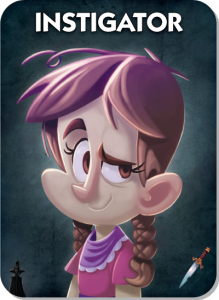 “Instigator, wake up. You may give any player the Mark of the Traitor.”

If she gave it to a player on Team Village the recipient is now working against the Instigator’s interest so the Instigator announcing what they did should undermine the traitor’s credibility.

If she gave it to a Vampire, then the Vampire will usually announce that they received the Mark of the Traitor anyway and out the other vampires. There is usually no point for the Instigator to lie about who they gave the Mark of the Traitor to, since everyone looks at their marks and knows if they received it or not. Any possible mark switching during the night phase, such as by the Gremlin or Pickpocket, will usually become known during the discussion before voting.