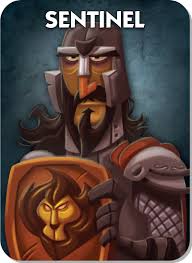 “Sentinel, wake up. You may place a shield token on any player’s card but your own.”

The Sentinel has no hidden information since the location of the shield token is evident to all as soon as the day phase starts. Like the Curator and Revealer, they are essentially a Villager with a small amount of agency during the night phase. As a Sentinel, beware of Werewolves taking the easy way out by claiming your role.