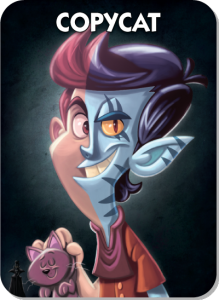 “Copycat, wake up and look at one of the center cards. You are now that role. If that role is called, wake up and do that action.”

Copycat does have some interesting dynamics when played with ONUW and Daybreak. The Seer, Apprentice Seer or Witch can verify/refute what the Copycat say they did. Similarly, if a copycat and an Alpha Wolf are both in play, the copycat could look at the center werewolf card and three wolves may wake up at night.

Normally, during pre-game card selection, it is hard to decide which among the wide selection of really interesting cards to include, so Copycat is an easy choice to leave out.