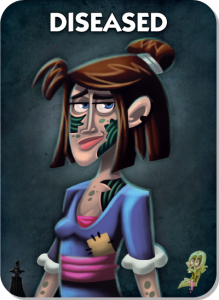 “Diseased, wake up. Place a Mark of Disease in front of any player to your left or right.”

At first blush, it seems that the Diseased and the recipient of the Mark of Disease are affected the same way and have the same strategy, but this is not so.

Conversely,  the recipient of the Mark of Disease should announce it straight away, irrespective of what team they are on. It will not only deter others from voting for them, but if they themself are on Team Village this will narrow down who the Diseased is (on either side of that player) and in turn help eliminate Vampire suspects.