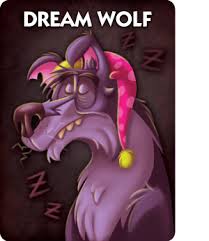 The Dream Wolf does not wake up with the other Werewolves. When the Werewolves are called, he sticks out his thumb.

The Dream Wolf is probably the most difficult role to play. Like the other Werewolves, he has the psychological burden of constructing and defending a lie, but unlike the Werewolves he has no information and doesn’t know who his allies are, if any. If the Dream Wolf is the only Werewolf he doesn’t  get the benefit of looking at a center card under the Lone Werewolf option.

As the Dream Wolf flying under the radar is more difficult, so one strategy is to make others think you are the Tanner by making and defending outrageous claims. When others start accusing you of the being the Tanner, or the Minion, the real Tanner won’t be outing himself to contradict you, but the Minion probably will, thus giving you insight into who has those two roles.