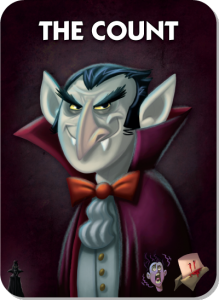 “Count, wake up and place the Mark of Fear in front of any non-Vampire player.”

The Mark of Fear will only prevent the Pickpocket, Marksman or Gremlin from acting (assuming only the base cards from ONUV are being used). Preventing one of these from acting will advantage Team Vampire, especially if it is the Marksman. But on the downside, giving the Mark of Fear provides Team Village certain knowledge that the Count is in the game.

The Count’s strategy then resolves to that of a Vampire.

2 thoughts on “The Count”