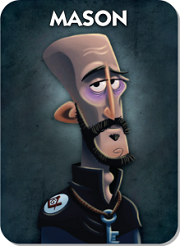 “Masons, wake up and look for other Masons.”

If you are one of a pair of Masons you are in a good position to corroborate each others stories. One or both of you can lie to draw out Werewolves, knowing that your risk of the lie backfiring is reduced since when you eventually reveal you are a Mason, the other Mason can back you up. Beware though that two Werewolves can claim to be two Masons. And if two Masons caught in a lie confess that they were both Masons the whole time, they will likely themselves be painted as Werewolves masquerading as Masons. Therefore it’s probably best if only one of the Masons lies, while the other Mason stays above reproach by maintaining the truth from the beginning saying that they were one of a pair of Masons but they don’t want to reveal who the other Mason is yet. The credibility of the truthful Mason provides a safety net for the other lying Mason.